I did get into the deep water, so this area was left out for me. I have no idea what is the difference between the big arkanum and the small one. But in this way, I can say that I see things from the other direction, and also from a completely new perspective, like the one that has stiffened down here.

"With tarot cards, angels can send us messages."
"And what if we want to send them a message?"

Don't you think I didn't buy such cards! There's a lot. But from the beginning I do things differently, and that is what is included in the Aquarius director's instructions. At the same time, these bought cards I used frequently, following my instincts. I decided how many cards to draw and where to put them. I had no idea what the tiled pages meant, but in the meantime I listened to all my senses and started improvising. The Light of the Angels cards, for example, was like I had all the cards wrapped around me and had been there for a long time, I mean months. I'll come back to that later, but the point here is that they can also be used for two-way communication.

Someone must have wondered why I did this if I didn't know anything about it. Well, at the very beginning of my evidence-gathering era, I met a college girl who knew this and waited with a skeptical face for what she was going to say. When she told me about my life spiced up with quite a few specifics, I was very surprised and from then on I looked at this world with a completely different eye.

The idea behind the Light of Angels card is that if these archangels can be summoned and do what I throw, then:
a.) I have nothing to do besides the throwing
b.) And if I have to do with it, these beings behave like programs when I see the observed energy channels.
This is where the idea of creating a programming card came into being, which works on the following principle. If we look at the tarot cards so far, they are intuitive, yet rationally organized. Field mortals obtain this information only through a specialist and, as we know, there are good interpreters and some bad interpreters. The principle of my cards is to bring this closer to human interpretation, and since the connections in your mind converge to a given interpretation, there is no need for anyone else to do so. All they needed was a paper store, a ruler, a couple of pens and a pair of scissors. The end result is a rational card that is organized intuitively. Since the ÉlményPark is an independent framework that is self-developed and is compatible with reality, no one is influenced or protected. 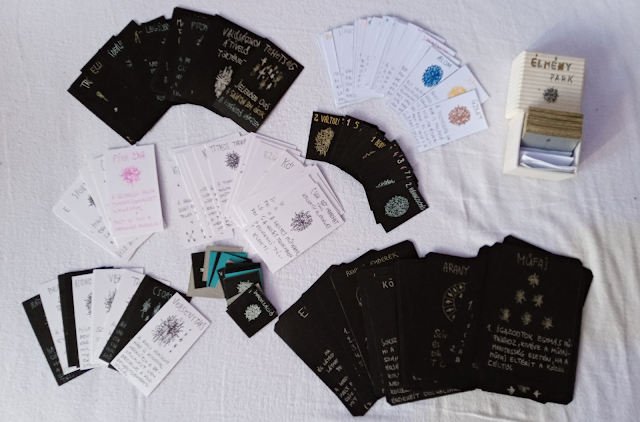 I call them programming cards because, until now, I was above everyone's head and couldn't be called anyone else. If you were to use them, you could talk about the same level of interaction, but I'm not really there to deal with that. Even with the cleaning, I have to wait for the time slots, why such a high-ranking being has no servants, then imagine throwing cards at you. Even though I could publish them but this is a very unfair business environment where 90% of the capital can go versus the inventor and I do not assist. The divine level would consider 10-15% fair, but even the inventor would look stupid in today's world. So under the current circumstances we agreed on 50%, which if an investor came in, the others would look stupid to him/her. But that is also one of the purposes of the descent, to organize this world to the level of divine vibration.

I already have my tarot cards, which in this case do not function as a message board, but rather as a keyboard. Even if I were a stupid guy, because I draw the cards, so I do not virtually exclude the presence of God (if it exists), but I have my own self-interest.

The material is constantly expanding